Since I’ve already looked all this stuff up, and the unshared info is burning a hole in my computer — dark smoke is literally billowing out of the vents right now — here’s a list of the best and worst multi-year deals given to free agent outfielders, from the winter after the 2004 season to today:

I’ve only looked at starting pitchers and outfielders, but this is the best multi-year free agent contract I’ve looked at so far. I suspect it might be the best, period. And that’s even with Beltran having a poor (by his standards) first season and missing half of both the 2009 and 2010 seasons.

You can argue that this was a better contract than Carlos Beltran’s deal, based on dollars per win and things like that. I don’t know if I would, but you could. Plus, I’m not even sure DeRosa should count as an outfielder — he did play more right field than anywhere else the two seasons before he signed this deal, but ended up playing mostly infield for Chicago. Anyway, he gave the Cubs, Indians and Cardinals an .800 OPS and played six positions over three years. Good deal.

Hit 44 home runs and posted a 1.006 OPS in 2006, which is where most of the value of this contract comes from. The White Sox exercised the option on this deal (bad idea) then extended Dye (worse idea), and finally let him walk after 2009.

As it turns out, decent defensive center fielders who also happen to be average hitters are pretty valuable. Byrd is sort of a poor man’s Mike Cameron, though I’m sure Mike Cameron has already been deemed a poor man’s something. 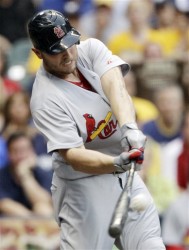 Two years in and a lot of time and money left . . . but so far so good. Holliday can be average-y for the next five years and it’ll still look like an okay deal. We talked about this on the Mostly Mets Podcast this week, but Matt Holliday might be baseball’s under-appreciated superstar. He’s an excellent hitter, but probably underrated because people sometimes overcompensate for his years playing in Colorado, undercompensate for his half-season in Oakland, and then he has been overshadowed by Albert Pujols in St. Louis. He’s a solid defensive left fielder and runs the bases well, things that normally go unnoticed in sluggers. All in all, Holliday ranks ninth by Fangraphs’ version of wins above replacement over the past three years, and he ranks fifth over the past six years. Consider what Carl Crawford and Jayson Werth got last winter, and I believe Holliday is probably underpaid.

I suspect Yankee Stadium’s short porch in left helped puff this one up a bit: Damon averaged 19 home runs a year as a Yankee after averaging 13 over his first nine full seasons everywhere else. Still, Damon posted a .363 OBP and covered all that ground in left field. Worth the money and then some.

Wake him up, put a bat in his hands and he’ll go 2-4 with a double. The Giants gave Alou a two-year contract; he missed about 100 games, but hit .312/.379/.541 with 41 home runs when he was healthy. The threat of injuries — which did happen — drove his price down, but it may have driven his price down too far. Good deal for the Giants.

Now we come to the pack, in loose order of extra value, as this whole list is. (That is, WAR times $4.5 million dollars, minus how much they were actually paid.)

We hit the long term contracts around here:

And then we come to the seven worst — first, one quick note on these seven bad ones. Only two of these contracts would crack the bottom ten for pitchers. Milton Bradley’s three year, $30 million dollar contract, if he were a pitcher, would only be the 15th-worst contract handed out to a starting pitcher over the 2005-2010 period. And all of these bad contracts for outfielders look like a bad result rooted in a bad processes, unlike the pitcher contracts, which look like a random mess of money and years and arm surgeries. Anyway . . .

The Cubs have really been hit-or-miss with their long term contracts. Mark DeRosa was a good deal, Aramis Ramirez has worked out okay, and they’ve signed some of the better starting pitcher contracts. But Alfonso Soriano, Carlos Zambrano, and this bad boy belong to Chicago, too. They should have seen this one coming, at least: A physically and emotionally brittle player who split the last nine seasons between six teams and had three good years along the way. And then they put his workspace next to the bleacher bums. I mean, SOMEONE in the front office should have seen it as a bad idea, right?

There are still three years left on this deal, and Soriano is now a poor defensive left fielder with knee problems and a .305 on-base percentage since 2009. On the other hand, he was a poor defensive second baseman, just exiled to the outfield, with a career 114 OPS+ when the Cubs signed him for eight years. So I’m not sure what they expected.

Hit .158/.256/.249 and struck out in nearly a third of his trips to the plate in 75 games with the Dodgers. The Rangers were able to squeeze some value out of Jones the next season as a part-time player, which actually makes this contract look a bit better. He’s been a useful player since then, but this is about as bad as a two-year contract can possibly be.

Like the Soriano deal, this was one of those “we’re not going to admit we were colluding before, but let’s not talk about it ever again and here’s a lot of money” gift contracts given out by owners after the 2006 season. Lee was a poor defender with a career 113 OPS+ who had hit a lot of his home runs in friendly parks for righthanded hitters. He averaged 2.2 WAR per season before signing this contract, and has averaged 1.3 WAR since then. So it’s not like he declined that much. Bad process, bad results.

Guillen had been on eight teams in eleven years, had a career 101 OPS+, and just four seasons with an above average OPS+ before he signed this contract. Oh, and he was a bad defender. He posted a 94 OPS+ with the Royals and continued to contribute little defensively. More poetic justice.

Matthews played for six teams in eight years before signing this year. I believe I see a pattern .  . . look, sometimes teams make mistakes and send off guys they should have kept, and sometimes good players bounce around from team to team before finding a home. But if six different teams have already decided they don’t want to retain a certain player, maybe it’s worth thinking twice before committing to that player for five years. Especially if he is a below-average hitter and has the first good, healthy season of his career during a walk year.

The Angels were actually able to net a reliever and $2 million dollars in salary relief out of this nightmare deal by trading Matthews to the Mets. Remember that? That actually happened.

Okay, those were the outfielders. Not anywhere near as bad as the pitchers, and it looks like it’s easier to identify the outfielder albatrosses before the fact. I’ll keep checking the other contracts signed over the past few winters, position by position, as the off-season rolls along, so check back in here for that sort of stuff.