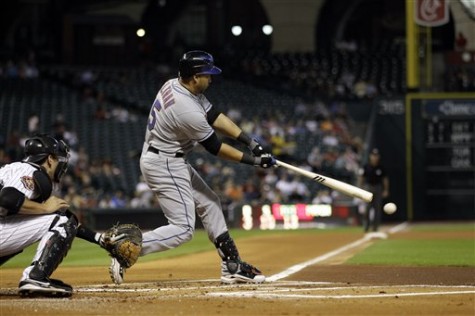 Since the Mets’ strategy for this offseason seems for the most part to be “run out the clock,” this leaves us to focus on their current roster — specifically at those players leaving the new front office no financial flexibility. This being the case, I’m going steal a page out of Bill Simmons’ book (by way of Fangraphs) and rank the trade value of everyone currently on the Mets, from 55 — the least valuable in trades — all the way down to 1 — the most valuable in trades.

A few rules and explanations:

– The list includes everyone on the Mets current 40 man roster, as well as the prospects on John Sickels’ top twenty list and Baseball America’s top ten. This gives us a total of 55 players to rank.

– THIS IS NOT A LIST OF THE BEST METS PLAYERS IN ORDER. It’s a list of who has the most value to another team in a trade. Johan Santana is a much better pitcher than Dillon Gee, but that’s not what we’re talking about here. We’re talking about who has more value in a trade. Which means . . .

– Contracts and age play a huge part. Jason Bay is a better player than Josh Thole, but would you rather trade for a declining Jason Bay and the guaranteed $51 million dollars left on his contract, or the improving Josh Thole, who will make $414,000 in 2011?

Because contracts count, the top of the list, where the least tradable players are, is populated with the Mets’ big money and aging players; the middle is mostly prospects; and the end of the list is where the young, underpaid players are.

– The list began life as a completely objective one, where every player was actually assigned a dollar value based on their predicted future performance against their contract — I drew heavily on Sickels, Baseball America, and Victor Wang’s research to assign dollar values to the prospects — but after setting it up like that, I also moved everyone around subjectively until it felt right.

– EDIT: I think I need to throw this in too: Prospects are NOT ranked in order of how good of a prospect they are. Pitching prospects, for the most part, are ranked ahead of hitting prospects simply because they are pitchers, and everyone always needs pitching. Also, Victor Wang took a look and found that, on average, John Sickels’ C-grade pitching prospects are worth more than their C-grade hitting counterparts. That said, numbers 40-23 on this list could really be moved around in any order, particularly if you know more about the Mets farm system than I do (which is probably likely). 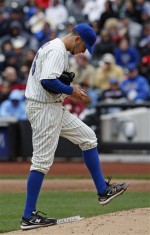 55. Oliver Perez, “pitcher” – Duh. Has the three year, $36 million dollar contract given to Oliver Perez become the worst investment in major league history? The Mets received only negative value on the field (6.81 ERA in 112.1 innings, 100 walks, 21 home runs, and 99 strikeouts), at the cost of $36 million dollars. If the team cut Perez today, it’s still a net loss of around $48 million between the awful performance and contract. Think about it: Had Omar Minaya set all that money on fire two winters ago instead of signing Ollie, the Mets would be better off today.

53. Johan Santana, starting pitcher – Dropping strikeout rate, two straight seasons shortened by surgery, and he’s likely to miss half of a this one on the disabled list. He’s got the trifecta of injuries, diminishing performance, and a huge contract — including a buyout of his 2014 option, Santana is owed $77.5 million for the next three seasons. Even if he returns to form for the second half of 2011, which is not a guarantee, I figure the Mets would need to eat at least $20 million of his remaining salaries to get someone else to take him next offseason. So Santana isn’t going anywhere in a trade. He should be decent but vastly overpaid for the next three years. 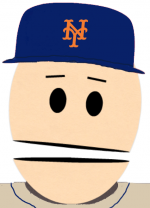 52. Jason Bay, left field – Another trifecta: Overpaid, injured, and coming off a bad year. That said, Bay’s deal is not a good contract, but also not a terrible one. At least not yet. Why does anyone ever sign free agents to long term deals, anyway?

51. Carlos Beltran, outfield – His trade value is so low here, partially because of his arthritic knee, but mostly because his contract doesn’t allow him to be offered arbitration after 2011. This means that his former team can’t recoup draft picks if Beltran walks after 2011, killing his a big part of his trade value. To move him, the Mets would have to eat some (or even all) of his salary, depending on how much they want in return.

50. Francisco Rodriguez, relief pitcher – This might seem like too high of a ranking, but I have a plan for what the Mets should do to keep the least-endearing-player’s doomsday option from vesting for 2012. Here it goes: The Mets use Rodriguez as their closer from April to June. Then, come July, they trade Rodriguez — in exchange for a middling pitching prospect — to a contending team with an established but perhaps shaky closer. The Mets also pay half of Rodriguez’ remaining salary in 2011. The team acquiring Rodriguez receives a top setup man and insurance for their closer, but doesn’t have to use Rodriguez to finish games, keeping his nightmare option from vesting. Additionally, Rodriguez’ new team can offer him arbitration after 2011, possibly netting draft picks. The Mets receive a warm body and save $20.5 million between 2011 and 2012. The only limiting factor is Rodriguez’ limited no-trade clause (ten teams) in his contract. Well, that and the rage issues.

By the way, if they do this — and I think they will — I should get to be an honorary assistant GM.

49. Luis Castillo, second baseman – I suspect that because Castillo is Latino and overpaid, he too often gets lumped in with Oliver Perez as nightmare Minaya deals that need to vanish. This seems cruel and unfair, as no one should be compared to Oliver Perez. By Fangraphs, Castillo has been overpaid by just $5.8 million dollars over the three seasons of his contract thus far; Perez has been overpaid by twice that every season. The Castillo contract is not a good one, but there are far worse contracts on just about every team. By the way, I think he’s the Opening Day second baseman and platoons with one of Turner/Emaus/Murphy.

Group 3: The Meh, or players with minimal value.

48 – 44. Pitcher Pat Misch, outfielder Jason Pridie, catcher Mike Nickeas, pitcher Tobi Stoner, and infielder Luis Hernandez – These five are on the 40 man roster, but they have no value in trades outside of being warm bodies — any of them would have to sign as minor league free agents elsewhere if released. They don’t have negative value, but they don’t have positive value either.

Remember when Jerry Manuel played Luis Hernandez for a week in September instead of Ruben Tejada? And then said he was just trying to keep Tejada’s batting average above .200? The farther and farther away I get from the Jerry Manuel era, the more and more terrible of a manager I remember him as.

43, 42. Pitchers Josh Stinson and Brad Holt: A 3.90 ERA in the high minors this season masked less impressive peripherals for Stinson . . .  A big name coming into this season, Holt was demoted to St. Lucie midseason and totally melted down, firing off 20 wild pitches and ending the season with an 8.34 ERA between two levels. Both need to rebuild their stock.

41. Manny Acosta, relief pitcher – Decent 2010 gives him the absolute tiniest amount of trade value possible. Acosta is my nominee for the 2011 “Most Obvious Dayton Moore Acquisition for the Royals” award.

We’ve hit the farm, so they start going quick now.

40, 39. Second baseman Jordany Valdespin and third baseman Jefry Marte – Valdespin posted a .760 OPS for the St. Lucie Mets, but struggled to a .547 OPS after a promotion to Binghamton. Marte’s .735 OPS for Savannah was actually an improvement over his .617 showing in 2009 at the same level; he’ll turn twenty this year. I’ll be so happy when the Mets stop rushing guys. 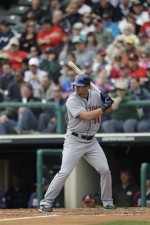 35-33. Third baseman Zach Lutz, outfielder Kirk Nieuwenhuis, outfielder Sean Ratliff – I have a theory that prospects with uncommon or oddly spelled names are more likely to become highly touted than prospects with more common names. I have no way of proving this is true, but if it is, I suspect it’s because the odd names are simply more memorable. Nieuwenhuis isn’t that much better than Lutz, if he is at all, but I bet far more Mets fans know about Captain Kirk than do about Lutz.

God help us all of ZeErika McQueen develops into anything.

32,31. Catcher Albert Cordero, outfielder Darrell Ceciliani – Low minors hitters who had good seasons in 2010. Both are young and worth watching, but also a long way off. These are the kind of guys who are thrown in against deadlines to get trades done, and then you never hear about half of them again. Cordero posted a .466 slugging percentage in rookie ball, and Ceciliani hit .351/.410/.531 playing center field for Brooklyn.

29. Ruben Tejada, second baseman – Lost his rookie status last year, so you won’t see Tejada on prospect lists anymore. I was shocked at how tiny he is in person. He’s listed at 5‘11“ and 160 pounds, which is total BS. Maybe he’s 5‘9“ on a tall day. Maybe. Tejada has a couple of years to figure out how to get himself on base often enough to be a competent utility infielder.

28. Lucas Duda, designated hitter – If I was shocked at how tiny Tejada is, Duda had the opposite effect. An enormous human being who — due to cranial size — bears a passing resemblance to Peter-Boyle-as-Young-Frankenstein’s-Monster. The Duda projects as a severely destitute man’s Adam Dunn, in that he’s big, lefthanded, and can’t play defense. Baseball America did rank him ahead of Fernando Martinez this offseason, so maybe he can hit enough to stick somewhere, though the Mets appear to be set in left and at first. 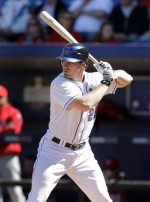 This man has actually hit third for the New York Mets

27. Daniel Murphy, third hitter – Value goes up if he can manage second base, down if he can’t. A full season in the majors has Murphy ranked above all the other no-position, future bench guys (Evans, Duda, Lutz) which may or may not be fair.

See what I just did there? I called Murphy, Evans, Duda, and Lutz “future bench guys,” and I guarantee someone is going to take offense to that. I think it would be healthy if the Mets grew some actual hitting prospects, so everyone doesn’t get so excited about these sort of guys anymore.

26-23: Pitchers Manuel Alvarez, Armando Rodriguez, Pedro Beato, Mark Cohoon – We’ve reached the first group of pitching prospects. The rest are in part two. This first group is older pitching prospects whose upside projects them as bullpen arms or fifth starters. Alvarez could help in the bullpen this year, Rodriguez had a good year as a starter in the low minors, Beato is a Rule 5 pick that could be a part of the 2011 pen, and Mark Cohoon did a decent Mark Buehrle impersonation in High-A and Double-A this season.

22. D.J. Carrasco, relief pitcher – The first Sandy Alderson acquisition. Carrasco has been used exclusively as a mopup man for the past three seasons, but if he can handle bigger spots, his value is going to skyrocket. You know, as much as the value for a middle reliever can skyrocket. So not really.

21. Ronny Paulino, catcher – Paulino is signed a one year contract, but it’s like a two year deal, as he’s still arbitration eligible for 2012. Solid insurance for Josh Thole, and has trade value because he’s signed for cheap and there is a perpetual shortage on catching help.

Okay, that’s it for Part One. Click Here for Part Two. I’ll accept arguments about the rankings in the comments.